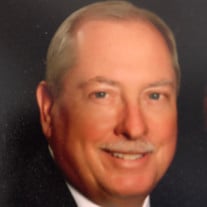 David Clinton Luster, 72 year old Edmond resident, passed away Thursday, September 6, 2018 in Ft. Smith, Arkansas. He was born April 19, 1946 in Tulsa to the late Vernon and Johnnie (Campbell) Luster. His early years were spent in Beggs before the family relocated to Maud. David graduated from Maud High School in 1964 and Northeastern State University in 1968. He served his country in the U.S. Army and worked in the energy industry for forty years. David enjoyed hunting, fishing and playing golf. He always looked forward to opening the Camp David gate and enjoying his farm. David was a 50 year Mason and currently a member of the Beggs Masonic Lodge #319, where he was Past Master. He was also the Past Master of the Ada Masonic Lodge #119. He was a member of the McAlester Consistory 33rd Degree, Bedouin Shrine Temple of Muskogee, Okmulgee County Shrine Club and the Royal Order of Jesters Court 99. David was preceded in death by his parents and a brother, Vernon “Skip” Luster, Jr. Survivors include his wife, Carol (Heller) Luster of the home, daughters, Michelle Luster and husband Daniel Ferguson of Pasadena, California, Melissa Luster and husband Brad Payne of Tulsa and Tarah Luster of Oklahoma City, grandchildren, Caelin Luster and Lux Patton, step-daughters, Sherry Jackson and husband Randy, Teresa Pinkston and husband Robert and Cassie Jones and husband Kevin, all of Beggs, thirteen step-grandchildren and five step-great grandchildren. David is also survived by many special friends in Edmond and Beggs. Friends may visit the funeral home on Monday from 2:00 P.M. – 8:00 P.M. with the family present from 5:00 P.M. – 7:00 P.M. for visitation. A funeral service will be held 11:00 A.M. Tuesday, September 11, 2018 at the Quail Springs United Methodist Church, 14617 N. Pennsylvania Avenue, Oklahoma City. Reverend Kris Tate will officiate. A time for viewing and visitation will begin at 10:00 A.M. at the church. Memorial contributions in David’s memory may be made to the Shriners Hospitals for Children in care of the funeral home or at https://shrinershospitalsforchildren.org/shc/donate or to the charity of the donor’s choice. Arrangements have been entrusted to the McClendon-Winters Funeral Home of Beggs, Oklahoma. Memories, condolences, photos and videos may be shared with the family on David’s Tribute Page of our website at www.mcclendon-winters.com

The family of David Clinton Luster created this Life Tributes page to make it easy to share your memories.