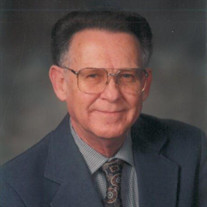 David M. (Dave) Harris, of Okmulgee, Oklahoma passed away on February 25, 2020 at the age of 85. Dave was born to Olin (Cy) Harris and Hattie Adeline (Fields) Harris in Morris, Oklahoma on September 18, 1934. He was a graduate of Morris High School Class of 1952 and following graduation he served four years in the United States Air Force during the Korean War. Dave married Betty (Flanary) Harris on September 19, 1958 in Morris. Two sons, David M. Harris, Jr., of Bluff City, Tennessee, and Dennis D. Harris, of Conroe, Texas, were born of that marriage and survive. Other survivors are Jane Harris, daughter-in-law and wife of son David, Bluff City, two granddaughters, Crystal Harris, Bluff City and Danelle Zempke, husband Ryan, great-grandson Roark, Edmond, Oklahoma, a sister-in-law, Marie Harris, Okmulgee, who provided a special friendship until his death, one nephew and one niece. Dave was preceded in death by his brother Olin (Bud) Harris of Okmulgee, and his parents, Cy and Hattie Harris. Dave attended Oklahoma State University and was a loyal OSU Cowboy fan until his death. After college he lived and worked in Stillwater, Oklahoma from 1960 to 1972, holding several management positions with the Newton Wall retail company. In 1973 Dave became Personnel Director for the City of Stillwater. After serving the City of Stillwater until 1981 he then moved, with his family, to Seminole, Oklahoma, as City Manager. Dave's dream was to, some day, return to the area where he grew up and in 1984 he became the City Manager of Okmulgee, Oklahoma. While serving as City Manager of Okmulgee he continued his very active affiliation with the State of Oklahoma City Management Association receiving numerous state and local acknowledgements and awards over the years. Included was the 1994 City Management Award for Outstanding Municipal Government Service, presented by the City Management Association of Oklahoma, the Okmulgee Chamber of Commerce Merit Award for his devotion to community, sound fiscal management and the progress made during his tenure with the City of Okmulgee. In 1998 Dave was honored for twenty-five years of service to local government by the International City Management Association. During that tenure he was one of the founding Board Members of the Oklahoma Municipal Assurance Group, providing medical and liability insurance for four hundred Oklahoma cities, and the Oklahoma Municipal League Credit Union for members of the Municipal League. Dave served as Okmulgee City Manager for fifteen years, until his retirement in 1999. His tenure as Okmulgee City Manager was the longest of any City Manager serving the city. Dave continued to live in Okmulgee after retirement, until his death. He will be missed by his family and many friends. The family will be present for visitation at the funeral home on Monday, March 2, 2020 from 4:00 P.M. - 6:00 P.M.. A graveside service will be held 10:00 A.M. Tuesday, March 3, 2020 at the Morris Cemetery Chapel.

David M. (Dave) Harris, of Okmulgee, Oklahoma passed away on February 25, 2020 at the age of 85. Dave was born to Olin (Cy) Harris and Hattie Adeline (Fields) Harris in Morris, Oklahoma on September 18, 1934. He was a graduate of Morris... View Obituary & Service Information

The family of David Mitchell Harris created this Life Tributes page to make it easy to share your memories.

David M. (Dave) Harris, of Okmulgee, Oklahoma passed away on...