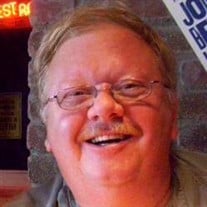 Daniel Steven Ashley, “Steve”, 57, of Morris, Oklahoma, passed away suddenly in his home on February 18, 2020. Steve was born on March 22, 1962, in Okmulgee, Oklahoma, to parents Dick and Dorma Sue Ashley. He was a graduate of Morris High School and subsequently enrolled at Oklahoma State University Institute of Technology. Following that, he served in the United States National Guard. Over the course of his life, he worked in different industries like carpentry, automotive services, and customer service. Steve was involved with his church, First Baptist in Morris, Oklahoma, and deeply valued his relationship with the Lord. He is survived by and his four children, Jacquelyne Vliss and husband, of Farmington, NM; Justine Cameron and husband, of Worcester, MA; Jamie Ashley, of Boston, MA; and Jacob Ashley, of Chicago, IL; his wife, Janice Ashley, of Glenpool; his father Dick Ashley, of Morris; his two sisters, Katie Buchanan and husband, of Jay and Sue Anne Shaw, of Bixby; his two brothers, Doug Ashley, of Okmulgee and Richard Ashley, of Tulsa; and numerous nieces and nephews. He is predeceased by his beloved mother Dorma Sue Ashley. Steve deeply enjoyed skydiving, science fiction, video games, cars/monster trucks, and Star Trek. He was a man full of adventure and adrenaline. This was evident by how much he enjoyed taking his family to Silver Dollar City and going on all of the rides. He also enjoyed riding four wheelers. Steve loved his four children very much. They will remember his love through his warm embraces; his big hugs. Visitation hours will be held 6-8pm on Monday, February 24, 2020, at McClendon-Winters Funeral Home (mcclendon-winters.com) in Morris, OK. A service will take place the following day, Tuesday, February 25, 2020, at 2pm, at First Baptist Church in Morris, OK. In lieu of flowers, donations can be made in his name to the American Foundation for Suicide Prevention (afsp.org). ----

The family of Daniel Steven Ashley created this Life Tributes page to make it easy to share your memories.