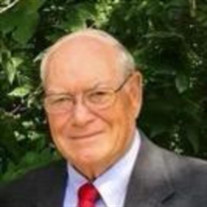 Henry “Dale” Flanagan passed away in Tulsa on Thursday, December 23, 2021 at the age of 82. He was born June 20, 1939 in Erick, Oklahoma to the late Henry and Mary Vasca (Loveless) Flanagan. Dale attended college at Central State College (University) where he met Sue Rice, whom he married on June 17, 1960 in Edmond, Oklahoma. Dale graduated from Southwestern Oklahoma State University with a Doctorate in Pharmacy in 1964. After graduation, the family moved to Beaver, Oklahoma before settling in Morris, Oklahoma in 1971. He and Sue had three children, Kevin, Lori, and Lisa. Dale worked for a number of pharmacies over his lifetime. He worked for Creek Nation Health Services as their pharmacist for 12 years before retiring. Dale had various interests, including woodworking, horses, and cattle. He won Reserve National Champion with his horse Edith Dolly in the 1970 American Paint Horse Association National Cutting competition. Dale was very successful at training cutting horses. He also loved raising and working with his cattle over the years. In his down time he was also an avid reader. Dale is preceded in death by his parents Henry and Vasca. He is survived by his wife of 61 years, Sue Flanagan of the home; son Kevin Flanagan and wife Lesa of Stillwater, OK; daughters Lisa Hart and husband Jim of Chandler, OK; Lori Vinsant and husband Mike of Morris, OK; brothers Kent Flanagan and wife Bonnie of OK; Dean Flanagan and wife Margaret of TX; sister Aletha Melzer of WA; grandchildren Logan and Kenzi Flanagan; Lauren and Landon Hart; and Bailey Martin and husband Michael. A memorial service will be held at 2:00 P.M., Wednesday, December 29, 2021 at Trinity Baptist Church, Morris with Reverend Gary McKeen officiating. Arrangements have been entrusted to the McClendon-Winters Funeral Home of Okmulgee. Memories, condolences, photos, and videos may be shared with the family at Dale’s Tribute Page of our website at www.mcclendon-winters.com

The family of Dale Flanagan created this Life Tributes page to make it easy to share your memories.

Henry “Dale” Flanagan passed away in Tulsa on Thursday, December...