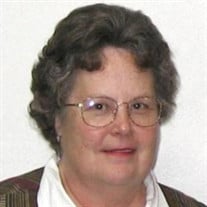 Cordelia “Claire” McClure, 82 of Cross Lanes, WV, formerly of Okmulgee OK, went home to be with the Lord, February 15th, 2021. Claire was born in Leavenworth, Kansas to the late Roscoe and Gladys (Henderson) Campbell. She graduated from high school in Meriden, Kansas and attended Kansas State University in Manhattan, Kansas. Claire married David McClure, December 20,1958. Claire was a full time Navy wife, raising 2 children as the family moved to wherever David was stationed. Each time they moved, the family always found a church, where they served during the time David was stationed there. For Claire, this took many forms--teaching Sunday School, working in the Nursery, Vacation Bible School, and cooking food. Claire and David often worked together to help serve large church dinners. After David retired, they joined Campers On Mission. When their team was sent out on a church construction project, Claire was involved in the sewing group, using her two sewing machines to make anything that was requested--curtains, doll clothes, backpacks, neonatal caps, and bandannas. Claire found satisfaction by serving. This often took the form of cooking, whether for family, work groups, or church--small groups or large. When Claire moved to WV with her daughter, she saw a news story about a West Virginia University doctor and nurse who came up with sewing directions for masks. She and her daughter made around 400 masks to be given to the medical community. Claire is preceded in death by her parents, husband of 55 years, David McClure, and sister Virginia Ludy. She is survived by daughter Gail (Randy) Merriken of WV (with whom she lived), son Tim (Beth) McClure of PA, grandchildren Tiffany (Chris) Schirtzinger of WV, Jeremy (Anastasia) Merriken of NC, Alan McClure, and Nicole McClure, of PA, great grandchildren, Honour Merriken, Curtis Merriken, Vincent Schirtzinger, and Elliott Schirtzinger, and her siblings, Roland (Jan) Campbell, Laurel (Everett) Browning, Helene (Jack) Hayward, and Shirley (Bob) Bowser. The family requests that in lieu of flowers, contributions be made in Claire’s name to the First Baptist Church Okmulgee, 311 West Fifth, Okmulgee, OK 74447. https://onrealm.org/FBCOkmulgee/give/McClure Arrangements are under the direction of the McClendon-Winters Funeral Home of Okmulgee. Plans for a future service will be determined at the family's discretion.

Cordelia &#8220;Claire&#8221; McClure, 82 of Cross Lanes, WV, formerly of Okmulgee OK, went home to be with the Lord, February 15th, 2021. Claire was born in Leavenworth, Kansas to the late Roscoe and Gladys (Henderson) Campbell. She graduated... View Obituary & Service Information

The family of Cordelia Claire McClure created this Life Tributes page to make it easy to share your memories.