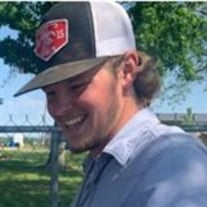 Clayton Troy Elijah Fisher entered this world October 7, 1998 to Mandi (Creason) and Brad Fisher at Okmulgee Memorial Hospital. He attended Beggs Public School from Pre-K until he graduated in 2017, where he excelled at sports. Though football was his passion, he also played basketball and baseball. As a senior in high school, Clay was on the road as a pipe-liner while finishing his education online. He received his welding certification from GCTC in Okmulgee. He was well known in the ranching community as a day worker and was making quite a name for himself as the owner of Circle F Fencing/Welding . Clay could teach himself to do or improve anything he set his mind to, whether playing the guitar and writing songs, doing leatherwork or cooking. He enjoyed cowboying, fishing, noodling, playing video games, and shooting the bull with his friends and family. Clay would drop whatever he was doing to help anyone in need and was a mentor to many young men on how to be kind and respectful. In 2009, Clay was hailed for his heroism in saving the life of his brother Bradford during a tragic fire. He was named an honorary fireman by the state fire Marshall and gifted with medals of military heroism by Terry Black. More than anything, though, Clay will be remembered as a being a wonderful father and husband. He was dedicated to his family, setting aside weekends as family time. Clay was saved and baptized at Oak Grove Church in Edna with his siblings when in middle school. He payed the legacy of loving the Lord forward to his children by choosing to have them dedicated last fall at Nuyaka Baptist Church. He loved his family. Clay passed away Saturday, June 5, 2021 in Okmulgee at twenty two years of age. Those preceding Clay in death were his maternal great grandparents Troy and Stella Creason and Harold Long; paternal grandfather, Jerry Fisher; paternal uncle, Bobby Fisher; and an infant baby. Survivors include his wife Abby Fanning; a son, Granger; daughters, Brylee and Sadie; parents, Mandi and Clint Atwell and Brad Fisher; siblings, Elizabeth and A.J. Welch, Bradford and Katie Fisher, Hagan Fisher, Savanna Atwell, and Dakota Jones; great grandmother, Juanita Long; grandparents, Jerry and Carla Creason, Bill and Darlene Fox, and Joy Kay and Nelson Reeder; aunts, Randi and Joe Roberts, Cassie and Patrick Cantrell, Robin and Kelly Farmer; nieces and nephews, Willa Jo, Bella, Brancher, Coy, and Lannie; cousins, Amariah, Ellie, and Trick; and numerous other family and friends. Friends may visit the funeral home on Thursday from 4:00 P.M. – 8:00 P.M. A funeral service will be held 10:00 A.M. Friday, June 11, 2021 at the Crossroads Baptist Church in Beggs with Reverend Chad Eads officiating. Interment will follow in the Wilson Salt Creek Cemetery. Casketbearers will be Jerry Wayne and the Cowboys-Jerry Creason, Bradford Fisher. Hagan Fisher, Patrick Cantrell, and Kasey Clay. Honorary casketbearers will be Dakota Cooper, Josh Atwell, Josh Hamilton, Mark Cottom, Dylan Turpin, Claude Brigance, Ross Hill, Dylan Corum, Garrett Pendergrass, Nick Coday and Floyd Ritter. Memorial contributions may be made in Clay’s memory at Western Sun Federal Credit Union. Arrangements have been entrusted to the McClendon-Winters Funeral Home of Okmulgee. Memories, condolences, photos and videos may be shared with the family on Clay's Tribute Page of our website at www.mcclendon-winters.com

Clayton Troy Elijah Fisher entered this world October 7, 1998 to Mandi (Creason) and Brad Fisher at Okmulgee Memorial Hospital. He attended Beggs Public School from Pre-K until he graduated in 2017, where he excelled at sports. Though football... View Obituary & Service Information

The family of Clayton Troy Elijah Fisher created this Life Tributes page to make it easy to share your memories.