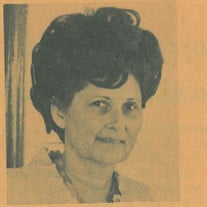 Clara L. Burcham, age 98, passed away on Thursday, September 14, 2017 in Tulsa, Oklahoma. She was born on Wednesday, April 16, 1919 to the late Jess W. and Leona (Potter) Vernon, in Colton, Oklahoma. Clara graduated from Beggs High School and later moved to California and attended UCLA majoring in Child Psychology. She married Eldon D. Burcham on December 19, 1936 in Beggs, Oklahoma. She taught school in California and later moved with family to Texas where she started the first Private Christian School in the State of Texas during her teaching career. Clara enjoyed teaching, quilting, sewing, and animals. Clara and her husband Eldon enjoyed traveling, especially to Israel and also a wedding anniversary to Jamaica. Clara was always helping someone, giving away quilts that she made and even in her later years in the nursing home, she was always helping someone. Clara loved being a wife to her husband of 76 years Eldon who preceded her in death on June 19, 2013. She is also preceded in death by a daughter Wendy Moore of Beggs. Clara is survived by a daughter, Adonna Roland of Tulsa, 2 grandsons, David Roland of Tulsa and Dion Moore of Beggs. 2 grand- daughters, Starr West of Tulsa and Robyn Greenway of Austin, Texas. 4 great grand children and 8 great great grandchildren. Funeral Services for Clara were held on Monday, September 18, 2017 at the McClendon-Winters Funeral Home Chapel of Beggs. Interment was at Beggs Cemetery under the direction of the McClendon-Winters Funeral Home of Beggs. Memories, condolences, photos and videos may be shared with the family on Clara’s Tribute Page of our website at www.mcclendon-winters.com.

The family of Clara L. Burcham created this Life Tributes page to make it easy to share your memories.