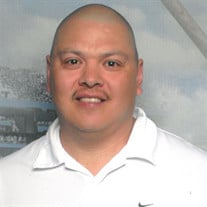 Christopher J'on Jackson, 47 beloved son, husband, and father went home to be with his Lord after a period of illness. Chris was born July 25, 1970 in Tahlequah, Oklahoma to Jackie and Dianna Jackson. Chris attended Okmulgee Schools graduating in May 1988. During his high school career, Chris received numerous awards. He is the Okmulgee Bulldog record holder for most yards received in one game. He was voted "Most Valuable Player" on offense. A three year letterman, he was selected to the All-District team for class 4A. A four year starter for the Okmulgee baseball team, Chris was chosen to the Oklahoma Coaches Association Region II All- Star team. He was voted "Most Athletic" by his classmates and was a co recipient for the Andy Skupien baseball scholarship. He furthered his education by attending Eastern Oklahoma State University in Wilburton, Oklahoma on that baseball scholarship, transferring a year later to Southwestern Oklahoma State University in Weatherford, Oklahoma. He enjoyed sports, being a devoted fan of the Florida State Seminoles, Miami Dolphins, and the New York Yankees. Chris met Christina Renee Guthrie in 1993 and they were married on April 23, 1994. On July 25, 1995 they celebrated the birth of their daughter, Cassie Renee Jackson, who shares the same birthday as her daddy. Their second child Christopher Cheyenne Bruce Jackson was born October 6, 1999. His children brought joy and contentment into his life. Chris is preceded in death by maternal grandmother Nancy Barnoskie and paternal grandparents Timmie and Louella Jackson and mother and father in law Debra and Gary Guthrie. Left to cherish his memories are his wife Christie of Springs Nursing Home in Muskogee, daughter Cassie Renee Jackson of Okmulgee, son Christopher Cheyenne B. Jackson of Okmulgee, parents Jackie and Dianna Jackson of Okmulgee, and a host of family and friends. Funeral service for Chris will be held 2:00 p.m. Saturday, June 2, 2018 at the McClendon-Winters Funeral Home Chapel in Okmulgee with Pastor Alfred Harley, Jr. to officiate. Interment will follow at the Council Hill Cemetery in Council Hill Oklahoma. Arrangements have been entrusted to the McClendon-Winters Funeral Home of Okmulgee.

The family of Christopher Jon Jackson created this Life Tributes page to make it easy to share your memories.