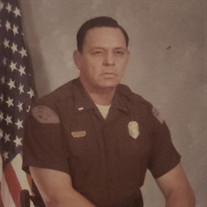 Chester H. Hodge, lifelong Okmulgee County resident and retired Chief of the Okmulgee Police Department passed away April 3, 2022, in Muskogee at 88 years of age. He was born in Schluter, Oklahoma to the late Leonard and Lydia (Bullard) Hodge. He attended school in Schluter, graduating in 1951. He married Kaye Cecile Harkrider on June 30, 1953, in Okmulgee. Chester served his country for 2 years in the U.S. Army. He was a Radio Instructor and repairman in 1954 while stationed in Nuremberg, Germany. He was stationed in various places such as: Georgia, Arkansas and in Lawton, Oklahoma. Chester served 35 years as an Okmulgee Police Officer, with 17 years as Chief of Police. After retirement Chester would make daily visits to Ned’s office where he was able to visit with the people that stopped by. He would accompany his brother Ned on his job. He said he was Ned’s muscle. Chester was very much a man of habit as he got older. He would make his rounds in a very specific order, that order was not to be deviated from. Chester enjoyed traveling and woodworking. As he got older he enjoyed using his IPAD. He was preceded in death by his parents Lenoard and Lydia, wife Kaye, a son, Dennis Ray Hodge, and brothers, Richard, George and Ned Hodge. Chester is survived by; a son Mike Hodge and wife Pam, of Park Hill, Oklahoma; six grandchildren, Michael Eric Hodge of Jenks, Oklahoma; Amanda McCaslin of Bixby, Oklahoma; Dena Hodge of Muskogee, OK; David Hodge of Okmulgee, OK, Jamie Holdcroft of Wagoner, OK, Michael Edward Hamrick of Jenks, OK, ten great grandchildren, a brother, Jim Hodge and wife Cathy of Paragould, Arkansas and numerous nieces and nephews. Viewing will be Thursday, April 7 from 12-8 P.M., visitation will be from 6-8 P.M. Funeral services will be 10:00 A.M. Friday, April 8, 2022, at the First Baptist Church with Robert Frost officiating. Interment will follow in the Okmulgee Cemetery. Pallbearers will be Larry Hodge, Jerry Hodge, Wayne Hodge, Daniel Hodge, Chris McCaslin, and Mike Morrison. Arrangements have been entrusted to the McClendon-Winters Funeral Home of Okmulgee. Memories, condolences, photos and videos may be shared with the family on Chester’s Tribute Page of our website at www.mcclendon-winters.com

Chester H. Hodge, lifelong Okmulgee County resident and retired Chief of the Okmulgee Police Department passed away April 3, 2022, in Muskogee at 88 years of age. He was born in Schluter, Oklahoma to the late Leonard and Lydia (Bullard) Hodge.... View Obituary & Service Information

The family of Chester H. Hodge created this Life Tributes page to make it easy to share your memories.