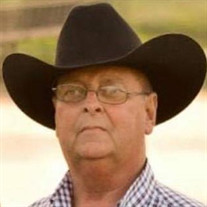 Charles White “Charley” passed away Monday, October 12, 2020 at his home he was 63 years of age after his long hard fought battle. Charley was born June 28, 1957 in Okmulgee to the late Darrel and Ramona Jean (Wells) White. He attended Twin Hills school and graduated from Preston High School. He began working at St. John Hospital where he met and fell head over heels in love with Esther and married her three months later in Twill Hills on May the 28, 1977. Eighteen months later they had their first child, a son, Dustin, who Charley referred to as his “Little Bull Rider” and then a daughter Nicki who he called “Sugar Bear”. Charley was a hard worker and had numerous jobs. He began his career as a rock crusher and hauler. He continued to add to his trades operating a backhoe, cutting wood and later went to ABC Electrical school to become an electrician and finally a journeyman contractor. He worked for Oil Capital Electric for 25 years until his retirement in 2007. He and Esther began their own company, Cheyenne MEP that quickly became very successful. Charley spent his time on various hobbies. He raised bucking bulls, cattle and goats. He would use his golf cart to chase and round up the cattle. He was a man with many great talents. He appreciated being outdoors, fishing and loved watching calves being born. He loved spending time with his family and friends. He loved the Lord and enjoyed eating brisket and sweets. He loved all seven of his grandkids and telling jokes, also “cheating” at dominoes. He will be greatly missed. He called Esther his ”Indian” and Esther called Charley “Cowboy”. Charley was preceded in death by his parents, Darrel and Ramona Jean and a very special uncle, Walter White and an aunt, Bettye White. He is survived by his wife, Esther of 43 years, son Dustin White and wife Christel, daughter Nicki Norwood and husband Will, sister Phyllis Nickle and husband Denny, brother Monte White and wife Christian, grandkids, Lane Bouse and wife Lindsi Bouse, Levi Bouse, Megan Norwood, Cody Norwood, Colton White, and Destiny White. He leaves behind numerous aunts, uncles, and cousins and many friends. A funeral service will be held at Twin Hills Gymnasium on Friday, October 16, 2020 at 10:00 A.M. Visitation will be Thursday, October, 15, 2020 and the McClendon-Winters Funeral Home Chapel from 2:00 P.M. – 8:00 P.M. The family will not have a gathering/dinner after the service.

The family of Charley White created this Life Tributes page to make it easy to share your memories.