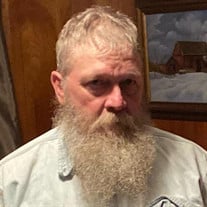 Charles Edward Strain, Jr. was born December 6, 1959 in Tulsa to Charles Edward Strain, Sr. and Donna June (Hampton) Strain. He passed away Friday, January 8, 2021 in Beggs at 61 years of age. Chuck moved with his family to Beggs in November of 1973. He attended Beggs Schools and graduated with the Class of 1978. Chuck enjoyed working on small engines and fishing. He will be remembered for the countless lives he touched. Chuck was preceded in death by his father, step-father, Melvin Davis, and maternal grandparents, Wallace and Blake Hampton. Survivors include his mother, Donna Strain, sisters, Chiquita Walls, Sherri Hanson and husband Butch, Deborah Henderson and Robin Hamilton and husband David, nine nieces and nephews, nineteen great nieces and nephews and a special friend, Linda Kay Fultz. A funeral service will be held 10:00 A.M. Wednesday, January 13, 2021 at the McClendon-Winters Funeral Home Chapel of Beggs, officiated by Reverend David Hamilton and Reverend Jason Ebenhack. Interment will follow in the South Heights Cemetery in Sapulpa. Casket bearers will be Jesse Walls, Calder Walls, Todd Hanson, and Kendall Courtney. Honorary casket bearers will be Scott Davis, Steve Taylor, Gary Loertcher and Butch Hanson. Arrangements have been entrusted to the McClendon-Winters Funeral Home of Beggs. Memories, condolences, photos and videos may be shared with the family on Chuck's Tribute Page of our website at www.mcclendon-winters.com

The family of Charles "Chuck" Edward Strain Jr. created this Life Tributes page to make it easy to share your memories.