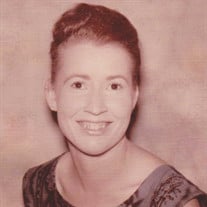 Charlene Rosemary (Matthews) Drye, 77, resident of Okmulgee, passed away Thursday, June 29th, 2017. She was born on December 14th, 1939 in Drumright, Oklahoma to Ira Thomas and Mary Jewel (Garman) Matthews. Her family later moved to California where she graduated from Artesia High School. Charlene met the love of her life, William Robert Drye and they married on June 10th, 1960 in Artesia, California. They were married 50 years before her husband's passing. After having children, they moved to Oklahoma and resided in the Okmulgee area for many years. Charlene spent the majority of her working career in health care. She was a member of the First Baptist Church in Okmulgee, and had a passion for children. Charlene was preceded in death by her husband, parents, an infant son, William Robert Thomas Drye, brother, Thomas Matthews, and sister, Twila Clothier. She is survived by three daughters: Teri Shrewsbury, Sheri Jackson and husband Paul, and Cindi Howell and husband Bobby, seven grandchildren, Joseph Shrewsbury, Timothy Shrewsbury and wife DaYoung, James Shrewsbury and wife Lori, Tina Shanks and husband Michael, Cody Jackson, Matthew and Erin Howell, five great grandchildren, Marrah, Trinity, and Landon Shanks, Haley Shrewsbury, and Aryia Shrewsbury, two brothers James Matthews and wife Helen, and Danny Matthews, along with a multitude of other family and friends. Services will be held at First Baptist Church of Okmulgee on Monday, July 3rd, 2017 at 2:00 P.M. with Reverend Lawrence Matlock officiating. Arrangements have been entrusted to the McClendon-Winters Funeral Home of Okmulgee. Memories, condolences, photos and videos may be shared with the family on Charlene’s Tribute Page of our website at www.mcclendon-winters.com

The family of Charlene R. (Matthews) Drye created this Life Tributes page to make it easy to share your memories.