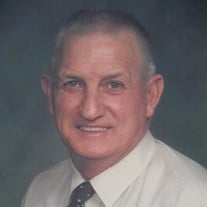 Cecil Dathan Vaughan, longtime Muskogee resident, passed away Wednesday, September 23, 2020 in Muskogee at 91 years of age. He was born August 28, 1929 in Morris to the late Cecil Eldridge and Gladys Elizabeth (Hunter) Vaughan. Dathan grew up in Morris and graduated from Morris High School in 1946. He married Zula Virginia Smith on September 2, 1949 in Okmulgee. He joined the United States Army in 1952, building landing strips while serving in Korea. He was a member of Southside Baptist Church in Okmulgee until they moved to Muskogee in 1972. Dathan and Zula worked for many years as owners and operators of the Tastee Freeze, Chili Bowl and Laundry Mat in Okmulgee, and later the Tastee Freeze in Muskogee. He was known for his love of tinkering and trading things, especially cars. He loved horses and rodeos and enjoyed listening to his police scanner and playing dominos. Dathan was preceded in death by his parents, wife of 64 years, Zula, a brother, Kenneth Dwaine Vaughan and a sister, LaVeda Brill. Survivors include two sons, Randall Vaughan and wife Molly of Ketchum and Jimmie Vaughan and wife Lisa of Waxahachie, Texas, grandsons, Phillip Campbell of Phoenix and Travis Vaughan and wife Stephanie of Tulsa, great grandchildren, Hannah Moore, Jakob Campbell and Elijah, Elizabeth, Emmett and Ezekiel Vaughan, great great grandchildren, James and John Moore, and numerous nieces and nephews. The family will receive friends Friday evening from 6-8 at the McClendon-Winters Funeral Home in Okmulgee. A funeral service will be held 11:00 A.M. Saturday, September 26, 2020 at the McClendon-Winters Funeral Home Chapel with Randall Vaughan officiating. Interment will follow in the Okmulgee Cemetery. Casketbearers will be Larry Vaughan, Kent Brill, Mike Chastain, Travis Vaughan, Phillip Campbell and Mickey Capps. Jakob Campbell and Danny Shiew will serve as honorary casketbearers. Arrangements are under the direction of the McClendon-Winters Funeral Home of Okmulgee. Memorial contributions may be made in Dathan’s memory to the Department of Veteran’s Affairs Voluntary Service or the Alzheimer’s Association Oklahoma Chapter. Memories, condolences, photos and videos may be shared with the family on Dathan’s Tribute Page of our website at www.mcclendon-winters.com

The family of Cecil Dathan Vaughan created this Life Tributes page to make it easy to share your memories.