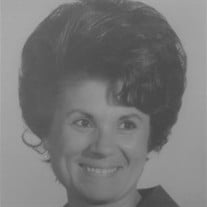 Carol D. Newberry, longtime Beggs resident, passed from this life on Monday, November 21, 2016 at Sapulpa at 73 years of age. Carol was born August 1, 1943 in Lubbock, Texas to the late Carl and Daisy (Tollison) Wynne. In 1957 after her father died, Carol moved to Okmulgee where she eventually met her future husband, who was in the U.S. Marines at the time. Carol and Lum were married on August 10, 1962 in Ravia, Oklahoma. They celebrated their 50th wedding anniversary in 2012. Carol was a faithful wife, mother, pastor’s wife, and a good friend to many. There wasn’t anything she wouldn’t try to help to do in the various churches she and her husband pastored (Sunday School, Missionary Society, Children and Youth Director, Church Board Member, and Hospitality Committee). She especially loved working with flowers and floral arrangements. She worked for fifteen years at Rathbones Flair Flowers of Tulsa and Bartlesville creating Christmas decorations, funeral wreaths and many other arrangements. She was preceded in death by her parents. Survivors include her husband. Lum Newberry, daughters, Dee Ann Johnson and husband Lyndon of Alamo, North Dakota and Tena Kennedy and her husband Chad of Dallas, Texas, four grandchildren, Jake, Samuel, Faith and Benjamin, sister, Lucky Jones, one half sister, Betty, a half-brother, Jimmy and numerous nieces and nephews. A funeral service will be held 10:00 A.M. Friday, November 25, 2016 at the McClendon-Winters Funeral Home Chapel with Chaplain Terry Snelling and Reverend Roy Edwards officiating. Interment will follow in the Okmulgee Cemetery. Casketbearers will be Danny Martin, Richard Cross, Chad Kennedy, Bill Newberry, Jr., Ben Martin and Jim Fuller. Arrangements have been entrusted to the McClendon-Winters Funeral Home of Okmulgee. Memories, condolences, photos and videos may be shared with the family on Carol’s Tribute Page of our website at www.mcclendon-winters.com

Carol D. Newberry, longtime Beggs resident, passed from this life on Monday, November 21, 2016 at Sapulpa at 73 years of age. Carol was born August 1, 1943 in Lubbock, Texas to the late Carl and Daisy (Tollison) Wynne. In 1957 after her father... View Obituary & Service Information

The family of Carol D. Newberry created this Life Tributes page to make it easy to share your memories.