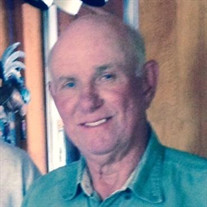 Carl Wayne Goodwin was born to Oral Cecil Goodwin (O.C) and Betty Lou Goodwin on July 18, 1948 in Hugo, Oklahoma. On September 26, 2016, he went to his heavenly home with his Saviour Jesus Christ at the age of 68. Carl was a lifelong resident of Okmulgee. Carl proudly served his country in the Vietnam War from April 23, 1968 to November 28, 1969. He accepted Jesus Christ as his Saviour at the age of 34 and was baptized on March 28, 1982 at the Northside Assembly of God Church here in Okmulgee, Oklahoma. He confessed Christ to others and represented the love of Christ to others during his life time. He helped his family, friends and strangers in many ways. Carl was employed in the maintenance department at Ball Corporation Glass Plant for approximately 35 years and retired in 2005. He really enjoyed fishing with many family and friends and had three childhood life time friends, J.D. Jones, Joe Davenport, and Bobby Micheau, who spent a lot of time on fishing trips together. They talked and laughed a lot and they always said Carl could always find the fish. He also enjoyed hunting all kinds of game. He made a garden several years and shared the harvest with many. Carl also liked to watch old western movies. He enjoyed the time he spent with grand kids, loved going to auctions and being with his family and friends. Carl was preceded in death by his father, Oral Cecil Goodwin on July 11, 2012. Carl’s life made a good difference to many lives. He loved his family so much. He looked out for others more than for himself. His surviving family includes his loving mother, Betty Goodwin, his four children & husbands, Carla and Harvey Rice, Kristie Lynn Goodwin, Valerie Michelle Goodwin and Cindy Scott and John Hughes, eight grandchildren, Sarah and Phillip Fisher, Kayla Looney, Alyssa Goodwin, Brianna Goodwin, Dallas Scott, Denver Hughes, and Dayton Hughes, three sisters and husbands, Carolyn and Larry Palmer, Charlotte and Larry Simpson, and Phyllis Goodwin, former wife and mother of his three daughters, Pamela Theolet, many nieces, nephews and great nieces, great nephews, aunts, uncles and cousins. Visitation will be held to share and celebrate Carl’s life on Friday, September 30, 2016 from 5:00 P.M. until 7:00 P.M. at the McClendon-Winters Funeral Home Chapel. Reverend Mike Kennedy will be officiating the services held at First Baptist Church in Okmulgee on Saturday, October 1, 2016 at 1:00 P.M . He will be laid to rest at the Okmulgee Cemetery. Arrangements have been entrusted to the McClendon-Winters Funeral Home of Okmulgee. Memories, condolences, photos and videos may be shared with the family on Carl’s Tribute Page of our website at www.mcclendon-winters.com

Carl Wayne Goodwin was born to Oral Cecil Goodwin (O.C) and Betty Lou Goodwin on July 18, 1948 in Hugo, Oklahoma. On September 26, 2016, he went to his heavenly home with his Saviour Jesus Christ at the age of 68. Carl was a lifelong resident... View Obituary & Service Information

The family of Carl Goodwin created this Life Tributes page to make it easy to share your memories.