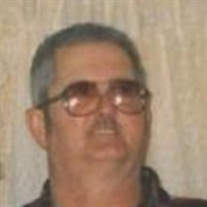 Buster Leon Howell, a resident of Okmulgee, OK, passed away March 12, 2022, in Muskogee, OK, at the age of 83. Buster was born July 10, 1938, in Beggs, OK, to Floyd and Ana Mae Howell. Buster grew up in Wilson, OK, where he attended school. Buster enlisted into the Air Force his senior year. He spent two years in England, which he loved to talk about. Buster was discharged in 1960 and went to work at Ball Brothers. He drove a forklift for 33 ½ years at Ball Brothers until he retired in 1994. He went to work in the hayfield until he started to get sick. Buster loved to work; he would always find something to do. He loved to fish, work puzzles, listen to music, watch westerns, and build anything. He was a huge Thunder fan but most of all he loved to spend time with his family. Buster is preceded in death by his parents; Floyd and Ana Mae Howell; sister Beatrice Kennedy; brothers Marland “Buddy” Howell, Marvin Howell, and Paul Howell. Buster is survived by his son; Jackie Howell of the home; daughters Sheena Howell of Shawnee, OK; Sharon Howell of Bethany, OK; Sally VanStraten and husband Brandon Berryhill of Okmulgee, OK, Kaylee VanStraten of Mission, TX, Haley VanStraten of Glenpool, OK, Tea VanStraten of Edmond, OK , Hannah Vanstraten of the home, stepson Frankie Barnett Jr. of Tulsa, OK, nine grandchildren, ten great-grandchildren, and several nephews and nieces. A memorial service will be held March 25, 2022, at 2:00 PM at McClendon-Winters Funeral Home Chapel. Arrangements and cremation services have been entrusted to the McClendon-Winters Funeral Home of Okmulgee. Memories, condolences, photos and videos may be shared with the family on Busters Tribute Page of our website at www.mcclendon-winters.com

The family of Buster Leon Howell created this Life Tributes page to make it easy to share your memories.