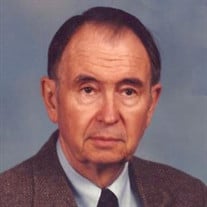 Burton L. Mann, age 91, died Friday, October 6, 2017 in Oklahoma City. He was born November 12, 1925 in Tulsa to W.R. “Bill” and Ruby Mann. The family moved to Okmulgee in 1934. He graduated from Okmulgee High School in 1943 and from The University of Oklahoma in 1949, with a major in finance. He was a member of PHI KAPPA PSI fraternity. He enlisted in 1943 in the Navy’s flight training program and served until 1946. He later served in the active Naval Air Force Reserve at the Naval Air Station, Dallas, as an intelligence officer, retiring in 1973 as a Lt. Commander. He was associated with The Okmulgee Savings and Loan Association from 1950 until 2008, serving as President from 1963. He served on the Board of the Okmulgee Parking Authority at the time it was established, on the Okmulgee Library Board and the Board of the Okmulgee Chapter of the American Red Cross. He was a member of the First United Methodist Church and served as Treasurer, Chairman of the Finance Committee and Chairman of the Administrative Board. He was an OU sports fan and had season tickets at Owen Stadium from 1956 until his death. He was preceded in death by his parents and by his wife of 19 years, Farrell Elizabeth (Beals) in 1969. He is survived by his three daughters, Meredith Taylor of Oklahoma City, Melissa Stearns of Tulsa, and Shelly O’Mealey of Okmulgee, five grandchildren, two great grandchildren, and by two brothers, Kenneth Mann of Okmulgee and Bill Mann of Guam. Services will be Wednesday, October 11, with a private family service at Okmulgee Cemetery at 1:00 pm, followed by a memorial service at 2:00 pm at The First United Methodist Church, 8th and Seminole. In lieu of flowers, contributions may be made to the Okmulgee chapter of The Salvation Army and the Pantry Fund of The First United Methodist Church.

The family of Burton L. Mann created this Life Tributes page to make it easy to share your memories.