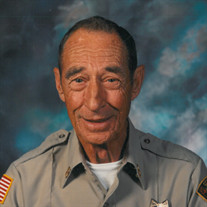 Buford “Boots” Ballard, a longtime Okmulgee resident, died November 22, 2019 at 96 years of age. He was born October 10, 1923 in Checotah, Oklahoma to Willie and Pearl (Dodge) Ballard. He married Sandra Elaine Lawson on November 3, 1976. Boots was a Gunner’s Mate in the U.S. Navy during World War II, having been honorably discharged after his service. He was a Deputy Sheriff, Field Deputy for County Assessor’s Office, water plant operator for the City of Okmulgee and a security officer. He enjoyed coon hunting, especially with his favorite dog Blaze, fishing and gardening. He was a longtime bowler and former President of the Okmulgee Round Up Club. Survivors include his wife of 43 years, Sandra Ballard of the home, his daughter, Phyllis Ballard, four grandsons, Travis, Tyler, Tanner and Trenton Perkins, all of California. He was preceded in death by his parents, Willie and Pearl Ballard, two sisters, Pauline Johnson and Latha Jenkins. Viewing will be Sunday, November 24, 2019 at the McClendon-Winters Funeral Home from 2:00 P.M. – 6:00 P.M. Services will be held 10:00 A.M. Monday, November 25, 2019 at the McClendon-Winters Funeral Home Chapel with Reverend Ray Moffeit officiating. Interment will follow in the Okmulgee Cemetery. Military honors will be provided by the U.S. Navy. Arrangements have been entrusted to the McClendon-Winters Funeral Home of Okmulgee. Memories, condolences, photos and videos may be shared with the family on Boot’s Tribute Page of our website at www.mcclendon-winters.com

The family of Buford "Boots" Ballard created this Life Tributes page to make it easy to share your memories.