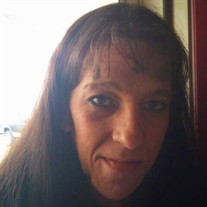 Bonnita L. Davis, a resident of Beggs, passed away on Tuesday, January 26, 2021 at the age of 42. She was born to Walter L. and Bonnie (Houston) McKinney on October 8, 1978 in Pryor, Oklahoma. Bonnita grew up and graduated from Pryor High School, where she was involved in the band. She loved attending band camp in Fayetteville, Arkansas. Bonnita was also quite well known for her bowling skills. She competed in many tournaments across several states. She later met Jerry Davis and were married in Mena, Arkansas in 2000. Bonnita worked for Riverspirit Casino in the Security Division in dispatch. In her more recent years, she was an avid softball enthusiast. She loved watching her daughter, Faith, play softball. Bonnita enjoyed being outdoors but most of all she loved spending time with her family. Bonnita was preceded in death by her grandparents Calvin and Goldie Houston of Strang, OK, Raymond and Ethel McKinney of Miami, OK. She is survived by her parents Walter and Bonnie of Bernice, OK, her husband Jerry and daughter Faith of the home, a brother Orlando and wife Lisa of Pryor, OK, nieces, Taylor Hall, Brittany Houston, Alyssa Houston, great nieces Isbell Houston, Athena Hall, McKinnley Lou all of Pryor, OK. Daughters in love, Joely Spear and Tat Jones and a son in love Hayden Hester. Funeral services will be Monday, February 1 at 2:00 P.M. at the McClendon-Winters Funeral Home Chapel with Pastor Scott McCullah officiating. Visitation will be Sunday, January 31, 2021 at the funeral home from 1:00 P.M. to 6:00 P.M. Interment will follow at the Okmulgee Cemetery. Casket bearers will be T.J. Frachiseur, Johnnie William Frachiseur, Anthony Davis, Bo Frachiseur, Tommy Miller, and Ben Layton. Honorary casket bearers will be Nathan Houston, Walt McKinney, Orlando Houston, and Neil Houston. Arrangements have been entrusted to the McClendon-Winters Funeral Home of Okmulgee. Memories, condolences, photos and videos may be shared with the family on Bonnita‘s Tribute Page of our website at www.mcclendon-winters.com

Bonnita L. Davis, a resident of Beggs, passed away on Tuesday, January 26, 2021 at the age of 42. She was born to Walter L. and Bonnie (Houston) McKinney on October 8, 1978 in Pryor, Oklahoma. Bonnita grew up and graduated from Pryor High School,... View Obituary & Service Information

The family of Bonnita L. Davis created this Life Tributes page to make it easy to share your memories.

Bonnita L. Davis, a resident of Beggs, passed away on Tuesday,...