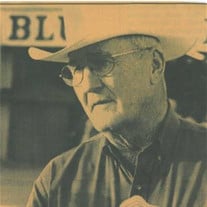 Bobby Lynn Ross of Morris, Oklahoma passed away Monday, October 31, 2016 at his home at the age of 82. He was born January 3, 1934 in Slick, Oklahoma to Hugh and Hazel (Hendrickson) Ross. He married Donna Jane Hornsby on May 5, 1956 in Las... View Obituary & Service Information

The family of Bobby Lynn Ross created this Life Tributes page to make it easy to share your memories.