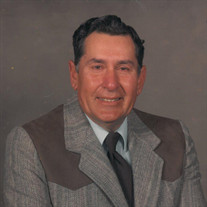 Billy Ray Callahan, age 85, passed away on Sunday, March 25, 2018 at Fountain View Manor Nursing Home in Henryetta, Oklahoma. He was born on Thursday, May 5, 1932 near Sallisaw, Oklahoma to Roy and Oletha (Maynard) Callahan. Mr. Callahan served two years in the U.S. Air Force during the Korean war era. After his military service, he attended Okmulgee State Tech and earned a degree in Automotive Mechanics. In 1953 he married Maedean Payne in Sallisaw, Oklahoma. After earning his automotive degree, Mr. Callahan was employed by Bill Harvey Chevrolet in Beggs, Oklahoma and Atoka, Oklahoma for approximately 25 years. He then worked another 25 years for the Indian Health Service. In his off time, Mr. Callahan liked to care for his small herd of cattle and his favorite horse, Champ. Mr. Callahan was of the Pentecostal faith. Mr. Callahan is proceeded in death by his parents, wife, two brothers, Ben Callahan and Harvey Callahan and one sister, Cherokee Edwards. Left to cherish his memory are one son, Allen Ray Callahan and wife Renee of Nuyaka, one brother, Hubert Callahan of Baytown, Texas, three sisters, Wanda Blevins and Rosalee Roberts of Collinsville, Oklahoma and Sue Ruth of Fort Smith, Arkansas, three grandchildren, Ginger Morris and husband Drew, Brice Callahan and wife Stephanie, Paton Callahan and wife Ashleigh, nine great grandchildren, Dallas Collins, Jr., Luke and Levi Morris, Maddie, Coy, Kayleigh, Abby, Calvin and Samantha Callahan and numerous nieces and nephews. Mr. Callahan also had a special affinity for Kelly Taylor and family of McKey, Oklahoma. Services for Mr. Callahan will be at 10:00 a.m. on Thursday, March 29, 2018 at the McClendon-Winters Funeral Home Chapel in Beggs, Oklahoma with Reverend Chris Gore officiating. Interment will be at the Beggs Cemetery. Viewing for Mr. Callahan will be on Wednesday, March 28, 2018 from 2 p.m. till 8 p.m. at the McClendon-Winters Funeral Home. Arrangements have been entrusted to the McClendon-Winters Funeral Home of Beggs. Memories, condolences, photos and videos may be shared with the family on Bill’s Tribute Page of our website at www.mcclendon-winters.com

The family of Billy Ray Callahan created this Life Tributes page to make it easy to share your memories.