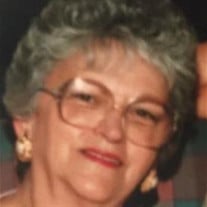 Beverly Lucyle Lewis, former Okmulgee resident, passed away on Saturday, December 31, 2016 in Oklahoma City at the age of 81. She was born March 16, 1935 in Lawton to the late Chandice and Lucyle (Brown) Johnson. She graduated from Lawton High School and received her Bachelor’s Degree from Oklahoma College for Women in Chickasha. Beverly married Frank L. Lewis on February 10, 1956 in Lawton. Together, they served for 32 years as missionaries in Indonesia for the International Mission Board of the Southern Baptist Convention. She enjoyed quilting and crafting and was a collector of antiques. Beverly is survived by her husband, Frank L. Lewis of Oklahoma City, daughters, Rebecca Lewis and Lisa Lewis of Oklahoma City, and Anna Rogers and husband John of Bangkok, Thailand, a son, Peter Lewis and wife Becky of Oklahoma City, grandchildren, Elijah Gentle of Dubai, Ezra Gentle and wife Amanda of Long Beach, California, Ezekiel Gentle of Carlsbad, California, Jeremiah Gentle of Norman, Christopher and William Rogers of Bangkok, Thailand and Deacon Lewis of Oklahoma City, siblings, Chandice “Bud” Johnson and wife Thema of North Dakota, Jeanne Burkholder of Broken Arrow, Harry C. Johnson and wife Mary of Oklahoma City and Jim Johnson and wife Kay of Lawton and numerous nieces and nephews. A funeral service will be held 11:00 A.M. Wednesday, January 11, 2017 at the First Baptist Church of Okmulgee with Dr. Dennis Taylor officiating. Interment will follow in the Okmulgee Cemetery. Arrangements have been entrusted to the McClendon-Winters Funeral Home of Okmulgee. Memories, condolences, photos and videos may be shared with the family on Beverly’s Tribute Page of our website at www.mcclendon-winters.com

Beverly Lucyle Lewis, former Okmulgee resident, passed away on Saturday, December 31, 2016 in Oklahoma City at the age of 81. She was born March 16, 1935 in Lawton to the late Chandice and Lucyle (Brown) Johnson. She graduated from Lawton... View Obituary & Service Information

The family of Beverly Lewis created this Life Tributes page to make it easy to share your memories.