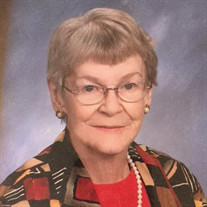 Betty Javene Davidson passed away during the afternoon hours of November 23, 2017. At the time of her passing, Betty was 92 years of age and residing at Rebold Manor, Okmulgee. Betty lived a full life and often expressed in both word and action her desire to be known as a “plain old country girl”. She was born to Earl Richard and Vera Smith in Chanute, Kansas on December 3, 1924 and raised as the only child on a family farm just west of town. Growing up during the Dust Bowl days, Betty learned simple living and hard work, values which she reflected often throughout her life. She graduated Valedictorian of Vilas High School in 1942 and could tell many colorful stories of her school years. She enjoyed telling of riding a horse year-around the three miles to and from her country school. Upon graduating high school, Betty attended Kansas University for two years grappling with her father’s desire for her to become a doctor and her own interest in journalism before she finally “danced my way out of school”, as she frequently reported. Upon leaving college to “get married and raise a family”, Betty lived with relatives in Wichita, Kansas and worked as a “Rosie the Riveter” in the local Boeing airplane plant, then for Southwestern Bell Telephone Company. In early 1946, she met and married Edward Summerfield Crumpacker, a recently discharged Navy Corpsman. Richard Summerfield Crumpacker was born in 1948. When that marriage ended in divorce the following year, Betty moved herself and her son back to the family farm in Chanute where she took work as a secretary at Oilfield Research Laboratories and met the love of her life. On August 19, 1949, Betty was married for the second time to George Welch Davidson, a U.S. Army veteran, and Allan Boyd Davidson was born in 1950. George and Betty built their home around values of faith, close family relationships and hard work. They moved to Okmulgee in 1955 where their long and strong marriage was celebrated by family and friends until George passed away in 1978. Betty lived the remaining 39 years of her life in Okmulgee at the family residence on North Collins Street then at Creek Elderly Housing for many years before Rebold Manor. Betty worked in the family-owned Tastee Freeze on North Okmulgee Street and several retail businesses until her full retirement in the mid-1990s. Remaining family include sons Richard (Crumpacker) Davidson and wife Ruth of Mounds, OK and Allan and wife Sandra Davidson of Davis, OK; grandsons David Glenn Davidson of Chickasaw, OK and Tracy Lynn Davidson of St. Louis, MO; four great grandchildren; and a niece, Judy Brewer of Kansas. A memorial service for Betty will be held on 2:00 P.M. Sunday, December 3, 2017, at the Clearview Baptist Church, 4900 North Wood Drive, Okmulgee with Reverend Randy Matthews officiating. Arrangements and cremation services have been entrusted to McClendon-Winters Funeral Home of Okmulgee. Memories, condolences, photos and videos may be shared with the family on Betty’s Tribute Page of our website at www.mcclendon-winters.com

Betty Javene Davidson passed away during the afternoon hours of November 23, 2017. At the time of her passing, Betty was 92 years of age and residing at Rebold Manor, Okmulgee. Betty lived a full life and often expressed in both word and action... View Obituary & Service Information

The family of Betty Javene Davidson created this Life Tributes page to make it easy to share your memories.

Betty Javene Davidson passed away during the afternoon hours...