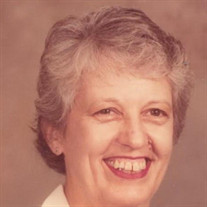 Barbara Mae Sipple, longtime Morris resident, passed away Thursday evening, October 14, 2021 in Okmulgee at 91 years of age. Barbara was born Monday, March 24, 1930 in Athol, Massachusetts to the late William M. and Lilly (Scott) Tait. She married Robert Henry Sipple on March 17, 1956 in Washington, D.C. Barbara proudly served in the United States Air Force and was Honorably Discharged October 17, 1956. They later moved to Owasso and in 1972 made their home in Morris. Barbara was a member of the Dahlia Flower Club of Morris, Okmulgee County Home Extension Club and the Tulsa Area Celiac Sprue Association. She was also an avid tatter. Preceding Barbara in death were her parents, husband and four brothers, Eric T. Tait, Lloyd B. Tait, James M. Tait and Alexander B. Tait. Survivors include Randy and Kasi Mathews and their children Matt, Josh, Lynnlee, Levi and Tucker of Morris. Friends may visit the funeral home on Tuesday from 12:00 P.M.-5:00 P.M. and Wednesday 9:00 A.M. – 6:00 P.M. A funeral service will be held 2:00 P.M., Thursday, October 21, 2021 at the McClendon-Winters Funeral Home Chapel with Reverend Randy Mathews officiating. Interment will follow in the Morris Cemetery where Military Honors will be conducted by the United States Air Force. Casket bearers will be Matt Mathews, Josh Mathews, Levi Mathews, Tucker Mathews and Randy Mathews. Honorary casket bearers will be Tom Graves and Lee Wilson. Arrangements have been entrusted to the McClendon-Winters Funeral Home of Okmulgee. Memories, condolences, photos and videos may be shared with the family on Barbara’s Tribute Page of our website at www.mcclendon-winters.com

The family of Barbara Mae Sipple created this Life Tributes page to make it easy to share your memories.