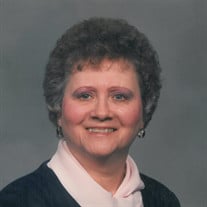 Barbara Jo Sams, longtime Beggs resident, passed away Tuesday morning, August 25, 2020 at her home. She was 87 years of age. Barbara was born “Friday the 13th” of January, 1933 in Ranger, Texas to the late James Oliver and Minnie Dale (Walton) Woodard. Her mother passed away when Barbara was 8 and she moved to Beggs where she was raised by her aunt and uncle, Ica and Leonard Cantrell. She graduated from Beggs High School in 1950. Barbara worked as a teller at the Bank of Beggs, where she met Robert “Bob” Sams. Barbara and Robert Alec Sams were united in marriage on October 30, 1954 at the First Baptist Church Parsonage in Beggs. He preceded her in death in 1985. Together they owned and operated Sams Backhoe and Dozer Service and the B&B Grocery of Fittstown, Oklahoma. They also lived in Utah from 1977-1982. Later she worked at the Beggs Schools. Barbara was church organist and pianist at Beggs First Baptist Church for many years. At the time of her death, she was a member of the Crossroads Baptist Church in Beggs. Barbara is survived by her daughters, Cathy Pinkston and husband Larry, Debbie Griffin and husband Bob and Terri Criner and husband Russell, grandchildren, Ben Pinkston and wife Kendal, Zac Pinkston, Nate Blackburn and wife Elizabeth, Nick Blackburn and wife Alicia, Sha Redding and husband Chris, Marlow Criner and Sam Criner, great grandchildren, Jack and Gentry Pinkston, Payton, Easton, Austin, Braxton, Thomas and Will Blackburn, Jade, Ryatt and Ensley Redding, brother-in-law, Kenneth Sams and numerous nieces and nephews. She was preceded in death by her parents, aunt and uncle, and her husband. Viewing will be from 2:00 P.M. – 8:00 P.M. on Thursday, August 27, 2020 with the family present to receive friends from 6:00 P.M. – 8:00 P.M. A funeral service will be held 10:00 A.M. Friday, August 28, 2020 at the Crossroads Baptist Church in Beggs with Reverend Brayden L. Buss officiating. The service will also be available to watch on the church’s Facebook page. Interment will follow in the Beggs Cemetery. Casketbearers will be Ben Pinkston, Zac Pinkston, Nate Blackburn, Nick Blackburn, Marlow Criner and Sam Criner. Memorial contributions may be made to the Falls Creek Scholarship Fund at Crossroads Baptist Church, P.O. Box 265, Beggs, Oklahoma 74421. Arrangements have been entrusted to the McClendon-Winters Funeral Home of Beggs. Memories, condolences, photos and videos may be shared with the family on Barbara’s Tribute Page of our website at www.mcclendon-winters.com

The family of Barbara Jo Sams created this Life Tributes page to make it easy to share your memories.