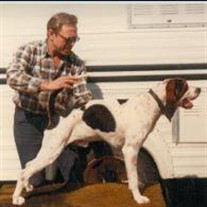 Audrey Oran “Buzzy” Nickle, 86, longtime Okmulgee resident, passed away Friday, May 12, 2017 at St. Francis Hospital in Tulsa. He was born February 12, 1931 in Granby, Missouri to the late Hershel and Burnice (Cooper) Nickle. Buzzy served his country in the United States Marine Corps. He then attended college on the G.I. Bill. He married Aletha June Rutherford on December 16, 1952. Buzzy worked at American Saint Gobin Glass Factory for over 25 years until his retirement. He enjoyed coon hunting, fishing and most of all, being with his grandkids. He was a 32 Degree Mason and member of the Harvest Community Church. Buzzy will be remembered for his sence of humor and as a good man. He was preceded in death by his father and step mothers, Hershel and Freda Nickle, mother, Burnice Youngblood, sister, Barbara Hutchison, and brothers, Lyle, Willis and Leo Nickle and Paul Henderson. Survivors include his wife June, of the home, a son, Dennis Oran Nickle and wife Phyllis of Okmulgee, grandchildren, Daniel Oran Nickle of Okmulgee, Carmen Taylor and Ede Engdahl, both of Broken Arrow, great grandchildren, Madison and Maddox Taylor, half-sisters, Lena Kaye and Esther and numerous nieces and nephews. A funeral service will be held 2:00 P.M. Wednesday, May 17, 2017 at the Harvest Community Church with Reverend Paul Ramsey officiating. Interment will follow in the Okmulgee Cemetery. Friends may visit the funeral home on Tuesday from 12:00 P.M.-8:00 P.M. Arrangements have been entrusted to the McClendon-Winters Funeral Home of Okmulgee. Memories, condolences, photos and videos may be shared with the family on Buzzy’s Tribute Page of our website at www.mcclendon-winters.com

The family of Audrey "Buzzy" Oran Nickle created this Life Tributes page to make it easy to share your memories.