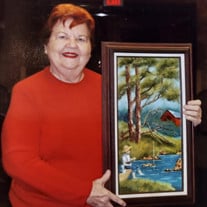 Arline E. Milligan was born April 23, 1929 in Earlsboro, Oklahoma to Odie Earl and Clara Mabel (Stuart) Earnest. Arline passed away Thursday morning, January 13, 2022 in Okmulgee at 92 years of age. She graduated in 1947 from Okmulgee High School, and in 1956 was the Women’s State Archer Champion. Arline was a member of the First Presbyterian Church and was past president of the Women’s Association. Arline enjoyed bowling. She worked as a D.J. at KOKL, owned a bookstore and El Rancho Motel and was a bookkeeper for Pine Properties. Arline is survived by her sister Mabel Earline French, a daughter, Karen Keesee, a son, Earl G. Milligan, Jr., grandchildren Tracy Storck and husband Corey, Kimberly Ramsell and husband Troy, and Dustin Milligan and wife Jamie, nine great grandchildren and two great great grandchildren. She was preceded in death by her husband, Earl G. Milligan, Sr., parents, a granddaughter Shelby, and four brothers, Eddie, Stuart, Harold, and O.E. Earnest. No services will be held. Interment will be in the Okmulgee Cemetery. Arrangements and cremation services have been entrusted to the McClendon-Winters Funeral Home of Okmulgee. Memories, condolences, photos and videos may be shared with the family on Arline’s Tribute Page of our website at www.mcclendon-winters.com

The family of Arline E. Milligan created this Life Tributes page to make it easy to share your memories.