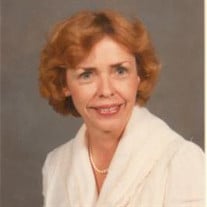 Ann Wise Eldridge was born on Feb 10, 1935 in Tulsa, OK to Frank and Kathleen Wilson. She was surrounded by family as she went to be with her Lord on July 24, 2016 in Tulsa, OK. Ann grew up in Okmulgee, OK, graduated from Okmulgee High School in 1953, then attended the University of Oklahoma where she earned a Bachelor's degree in Business Education in 1957. She was proud to be a Sooner and the 1st in her family to earn a college degree. While at OU, she was a member of Pi Beta Phi Sorority where she served as the chapter Corresponding Secretary and earned the ABO Award for Outstanding Senior. This award honors one Pi Phi Senior from all of the national collegiate chapters who best exemplifies Pi Beta Phi's qualities of excellent scholarship and outstanding campus participation and community leadership during her collegiate career. She was also a member of Alpha Lambda Delta- Freshman Honor Society (top 20%) and Pi Omega Pi National Business Education Teacher Honor Society. She married Jim Bill Wise in August of 1957 and they made their home in Okmulgee. She taught Business Principles at OSU Tech for 10 years, and from 1979-1988 was a partner in D'nita ladies' specialty shop with her sister-in-law, Dindy Foster. She was a charter member of the Okmulgee PEO-Chapter ER where she served as past President and was a delegate to the International Convention. For many years, she was a faithful member of the First Baptist Church Okmulgee where she served on many committees and formerly served as nursery coordinator and worked with the youth group. She was a member of the Retail Merchants Board of Directors- President 1988, the Okmulgee Hospital Board of Directors 1980-86, the OK Foundation for Excellence Board of Directors- appointed by then Senator David Boren 1986-1991, the Red Cross Board of Directors-Treasurer, the Arts Council of Oklahoma, and the Okmulgee Baptist Village Advisory Committee 1988-89 (Secretary '89), 1991-94. After Jim Bill's death, Ann married Dr H.G. Eldridge and they later moved to Tulsa, OK. They spent 11 happy years together sharing their common enjoyment of traveling and love of church-related activities before his death in 2004. She was a member of South Tulsa Baptist Church and the Kingdom Builders' Sunday School Class. Ann was preceded in death by her parents, an infant son, 2 husbands, sister Dorothy MeGown and husband Xen MeGown, and daughter-in-law Sherry Wise. She is survived by daughter Melanie Wise Bigbie and husband Bane of Norman, OK; son Jim Wise of Okmulgee, OK; sister-in-law Dindy Foster; brother-in-law Chris Wise, grandchildren Nathan, Ben and Brett Bigbie, Brayden Buss and wife Lauren, Maddy, Will and Grant Wise; great-grandson Wyatt Buss; nephews Jeff MeGown, Steve MeGown and Gilbert York. Equally special to Ann were stepsons Dr. David Eldridge and the late Richard Eldridge, along with their wives and families. A memorial service for Ann will be held on Wednesday, July 27 at the First Baptist Church Okmulgee at 1:30 p.m. with Reverend Jerry Fielder and Reverend Brayden Buss officiating. In lieu of flowers, donations may be made to Falls Creek Centennial Campaign. https://www.bgco.org, or make check out to BGCO, Development Office, 3800 N. May Ave., Oklahoma City, OK 73112 FCCC: In memory of Ann W. Eldridge

Ann Wise Eldridge was born on Feb 10, 1935 in Tulsa, OK to Frank and Kathleen Wilson. She was surrounded by family as she went to be with her Lord on July 24, 2016 in Tulsa, OK. Ann grew up in Okmulgee, OK, graduated from Okmulgee High School... View Obituary & Service Information

The family of Ann Wise Eldridge created this Life Tributes page to make it easy to share your memories.