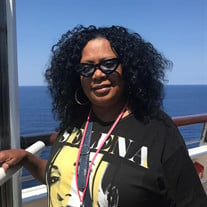 Andrea Lynette Tate was born on January 5, 1965, in Beggs, Oklahoma to Fayetta Tate (Demry) and Jack Williamson. Faye later married Billy Joe Demry and he raised Andrea and her sister, Bridgette as his own. Andrea attended the Beggs Public School system, and later went on to attend college at East Central University in Ada, OK. After her time in college, she eventually moved to Dallas, Texas and joined the workforce as a loan officer at various mortgage companies. Andrea married her childhood friend, Michael Stell and from this union, her daughter, Indigo was born. After spending many years in Dallas Texas, she desired to be closer to her family and moved back to Oklahoma, where she then met and married Leon Goudeau and had her baby girl Jordan. Andrea was affectionately known as “Fanna” to her family and friends. She enjoyed life through her family and friends, but what was most important to her, was being a support system to her children, a confidant to her sister, and an attentive caretaker to Paw Paw! Fanna never met a stranger, had an infectious personality, with the laugh to match and was always joking and ragging with family and friends! She was a giving person, a caretaker at heart, and always quick to lend a helping hand. Her memory will remain in the hearts of her loving family; her daughters, Indigo Stell of Dallas, TX and Jordan Goudeau of the home; one sister, Bridgette Carter (Dannie) of Murphy, TX; nephews, Taylor Carter (Ashley) of Wylie, TX and Tyler Carter of Murphy, TX; father, Billy Joe Demry and a special friend, Larry “Sunny” Grayson of Beggs, OK; and a host of loving uncles, aunts, cousins and numerous relatives and friends. She was preceded in death by her mother, Fayetta Demry; husband, Leon Goudeau; grandmother, Wallina “Big Mama” Thompson; grandfather, Corporal Tate, Sr; and other uncles, aunts, and cousins. Friends may visit the funeral home on Sunday, April 24, 2022 from 3:00 P.M. – 6:00 P.M. Funeral services will be held 11:00 A.M., Monday, April 25, 2022 at the First Baptist Church South in Beggs. Interment will follow in the Beggs Cemetery. Arrangements have been entrusted to the McClendon-Winters Funeral Home of Beggs. Memories, condolences, photos and videos may be shared with the family on Andrea’s Tribute Page of our website at www.mcclendon-winters.com

Andrea Lynette Tate was born on January 5, 1965, in Beggs, Oklahoma to Fayetta Tate (Demry) and Jack Williamson. Faye later married Billy Joe Demry and he raised Andrea and her sister, Bridgette as his own. Andrea attended the Beggs Public... View Obituary & Service Information

The family of Andrea Lynette Goudeau created this Life Tributes page to make it easy to share your memories.