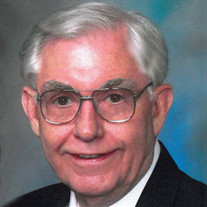 Alvin Arterbury, age 91, a longtime resident of Okmulgee Oklahoma passed away 01/30/2022. Alvin was born March 28, 1930 in Duncan, Oklahoma to parents, Viona Lillie and Alvin Chloe Arterbury. He graduated from Duncan High School in 1948. Alvin played 3 years for the Duncan Demon's football team and had the honor of being selected as an All Conference player in 1947. Alvin served in the US Army during the Korean War as a field radio repairman, attached to the 82nd Airborne. While home on leave from the Army in 1951, he married his high school sweetheart, Ollie Mae Price. He used the GI Bill to obtain an associate degree in Air Conditioning from the OSU Institute of Technology in Okmulgee, Oklahoma and a BS in Technical Education from OSU in Stillwater, OK. He taught Air Conditioning and Electrical Controls for 21 years and then was promoted to Head of the Department. He served in that capacity for 15 years. Alvin was a long-time member of the First Presbyterian Church in Okmulgee. He was on the Session for many years and was the head of maintenance for many years as well. He was proceeded in death by his wife of 65 years Ollie Mae, his parents, Viona Lillie and Alvin Chloe Arterbury, and his sister Wanda Thomas. Survivors include his children; Brandon Arterbury and wife Becky, Keland Arterbury and wife Alice and Tana Macha (Arterbury) and husband Billy, grandchildren Trent Arterbury, Keith Arterbury, Scott Arterbury, Aaron Arterbury, Allison Arterbury, Brooke Herbrich and Blake Macha, and 9 great grandchildren. A committal service will be held at 10:00 A.M., Friday February 4th at the Okmulgee Cemetery followed by a memorial service to honor Alvin’s life will be at 11:00 A.M. at First Presbyterian Church, Okmulgee OK. Visitation will be Thursday, February 3, 2022, from 4 P.M. to 7 P.M. at the McClendon-Winters Funeral Home Chapel in Okmulgee. In memory of Alvin, donations can be made to the First Presbyterian Church in Okmulgee Ok. 401 South Seminole 74447. Arrangements have been entrusted to the McClendon-Winters Funeral Home of Okmulgee. Memories, condolences, photos and videos may be shared with the family on Alvin’s Tribute Page of our website at www.mcclendon-winters.com

The family of Alvin Junior Arterbury created this Life Tributes page to make it easy to share your memories.