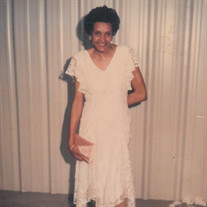 One day God looked over the balcony of Heaven and chose to bless Nathaniel and Rosie Thompson with another baby girl and they decided to name her "Alva Loyce Thompson" She was born on March 19, 1934 in Beggs, Oklahoma. She became the seventh child born to this union. Alva attended Beggs Wheatly School and joined Greater Mount Zion Baptist Church at an early age. She worked for many years as a Certified Medication Technician and later became the Activity Director at the Beggs Nursing Center. Later on Alva decided to become an entrepreneur by having her own home daycare. She retired five years later. Alva was an awesome wife and mother. She loved cooking and arts and crafts. Alva really enjoyed being outdoors planting her flowers. Most of all she loved her family. In 1951 she married Donzell Hill and to this union one son was born (Donnie Hill). In 1953 she met and married J.C. Williamson and to this Union eight children were born. Five of them are deceased now. She is preceded in death by her parents, husband of fifty-six years Mr. J.C. Williamson, five children and twelve siblings. Mrs. Alva leaves to cherish her memories three daughters, Faleshia Williamson of Oklahoma City, Charlotte Williamson of Beggs, and Kellie Watkins and husband Fredrick of Mississippi, four grandchildren Damien Irvin, Dederick Williamson, Ashley Williamson, and Justin Williamson, four great grandchildren Arianna, Damontae, Cori, and Cameryn, a host of nieces and nephews and her furbaby "Kitty." Funeral services for Mrs. Williamson will be held 11:00AM, Saturday November 23, 2019 at the First Baptist Church South in Beggs, Oklahoma with Pastor Gregory Lewis officiating. Interment will follow at the Beggs Cemetery. Friends may visit Mrs. Williamson at the funeral home in Beggs on Friday, November 22, 2019 from 1:00pm until 8:00pm with the family present from 5:00pm-7:00pm for visitation. Casketbearers will be Damien Irvin, Damontae Wesley, Dederick Williamson, Fredrick Watkins, Justin Williamson, and Earl Johnson. Honorary Casketbearers will be the First Baptist Church South Men's Auxiliary. Flower Bearers will be Ashley Williamson, Ariana Williamson, Melanie Grayson, Laketa Thompson, Lori Checotah Glazier, Kahtine Johns, and Connie Townsell.

One day God looked over the balcony of Heaven and chose to bless Nathaniel and Rosie Thompson with another baby girl and they decided to name her "Alva Loyce Thompson" She was born on March 19, 1934 in Beggs, Oklahoma. She became the... View Obituary & Service Information

The family of Alva Loyce Williamson created this Life Tributes page to make it easy to share your memories.

One day God looked over the balcony of Heaven and chose to bless...